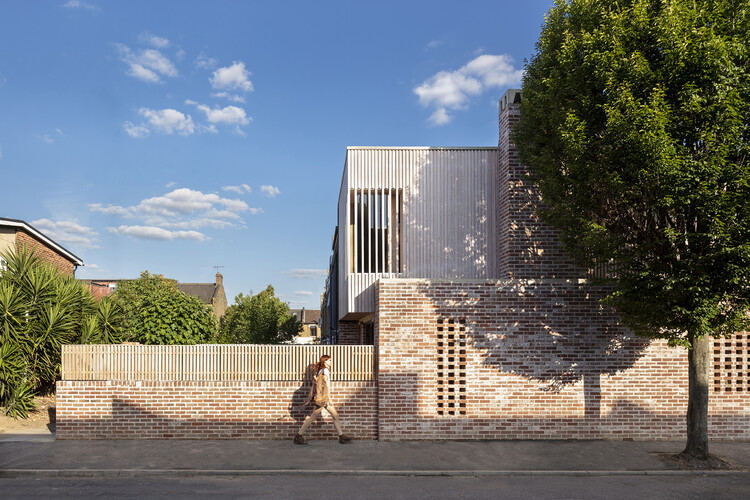 Text description provided by the architects. Leyton House forms a new home for a filmmaker and writer. The design reimagines a neglected, narrow plot that sits at the end of a 1960s terrace built on the site of a World War 2 bomb. The brief was to maximize the potential of the infill site creating a space to live and work that suits the client’s current requirements but also has the potential to adapt and grow as circumstances change.

A lengthy two-year process was undertaken to convince the planners to embrace a modern and contemporary design approach that ultimately gained approval for a three-story house that respects the spirit of the adjacent ’60s terrace while addressing the Victorian context of the neighboring street. The key to unlocking the site was utilizing the below-ground potential and integrating subterranean spaces into the plan layout. Complex structural works were undertaken to create a full-length basement.

Budget constraints meant that there was no main contractor, and each package was separately managed. Close collaboration with the client – who acted as project manager – was essential and the process required dedicated commitment from the building team who enthusiastically bought into the overall design. The project is defined by its elemental nature and is composed of a brick plinth at street level with a finely detailed timber framed structure above. The basement below is formed around two courtyards that enable daylight to penetrate deep into the plan. The simple form is completed by a sculptural brick chimney, which punctuates the overall composition and forms a focal point for the open-plan ground floor.

A soft, reddish brick was chosen to suit the varied context, with concrete detailing and flush white lime mortar amplifying the solid monolithic base. Siberian Larch timberwork at the first-floor level is finished in white oil, creating a unified composition that expresses the tectonic relationship between the upper and lower volumes. The forms are subtlely articulated across the site, addressing the street and corner context. A setback between the ground and the first floor creates a roof light extending along the length of the living area. Timber joists are exposed internally, modulating incoming light and creating shadows that enrich the space throughout the day. A continuous in-situ concrete bench demarcates the kitchen, dining, and living areas forming a tectonically simple and ordered space.

Street-facing external windows are screened for privacy, emphasizing the elemental nature of the volumes. Large glazed openings link to internal courtyards and a picture window is formed on the first floor, framing distant views of the city beyond. Internally a warm, natural palette of materials is employed – inspired in part by the client’s time spent living in Mexico – with concrete, brick, and timber softening as progress is made from public to private. A clay plaster wall links all three floors and at the basement level, different tones of clay wrap the walls and ceilings creating a feeling of enclosure and warmth. A top-lit staircase opens up to allow light to wash throughout. Through material integrity and careful detailing the building seeks to create a generosity of space and calmness that the original site did not immediately suggest was possible.