The conference centre, designed by Chinese architecture studio MAD, is located on a mountain next to China’s largest ski resort Yabuli in the northeastern province of Heilongjiang.

Brandston Partnership‘s lighting design for the project, which has been shortlisted in the architectural lighting design category of Dezeen Awards 2022, aims to help the tent-like building with an overhanging roof blend in with its surroundings.

“Our design concept aims to reduce external interference through the architectural language of light, and advocate the integration of the building and the environment as a whole, rather than focusing on the light itself,” Brandston Partnership said.

The studio used mostly concealed facade lighting to create the least disruption to the architecture and to create the feel of light snow covering the roof.

The highly reflective silver aluminium plate on the curved roof is lit up at night to create a display of light and shadows.

Brandon Partnership also added pole-mounted flood lights that were designed to resemble moonlight from a distance, as well as a dimming system to highlight the building’s shape at night.

“We use a combination of precision project lamps and an overall dimming system to adapt to the brightness requirements of different periods of time,” said the studio. 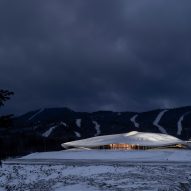 “Our design is not just about solving technical problems, but about harmonising the building with the environment,” it added.

Other projects shortlisted in the architectural lighting design category of Dezeen Awards 2022 include a live performance theatre with illuminated tiles in China and lighting upgrade for a historical theatre in London.

The photography is by Li Zhou.