‘LLOVE HOUSE’ designed by Schemata Architects sees a sweeping makeover of an old dwelling that is over 110 years old in Onomichi, Japan. The design team stripped away the structure to revive the original charm of the house, returning it to its original state. Before the reconstruction process began, Jo Nagasaka, leading architect of the project, spent some time in the building, observing and trying to understand its condition, the hidden beauty, and the potential to reveal it.

Jo Nagasaka joined forces with a group of creative people with passion and enthusiasm, including novelists, cooks, musicians, artists, architects, designers, and many others, to revive the house, generating a gathering space that brings creators from all over the world closer together, serving as a new way of cultural exchange. The structure is defined by the exceptional landscape it opens onto, and the architects opted to maintain this nostalgic view and restore its initial charm. 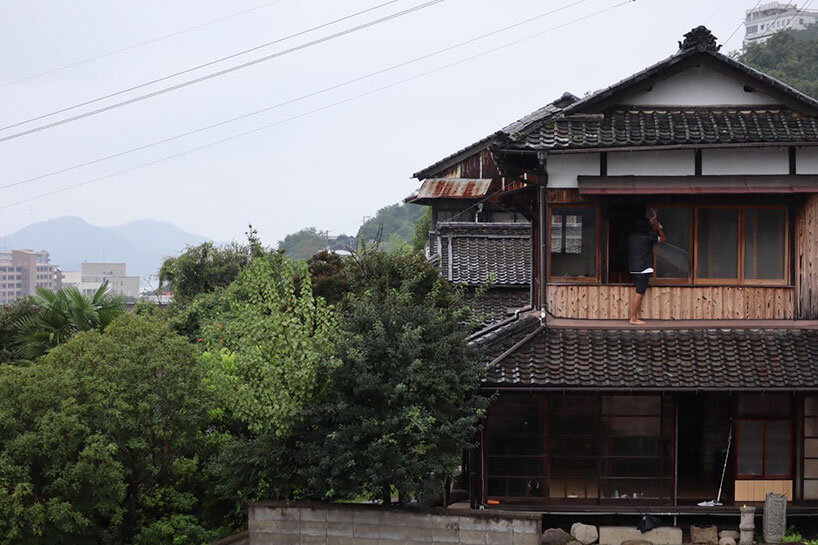 all images by Ryo Takatsuka

‘LLOVE HOUSE is a house that Jo Nagasaka fell in love with at first sight,’ shares the team. Onomichi region prospered through trade using the Onomichi Chanel. Merchants of the time built villas with a great view halfway up the mountainside to impress their guests. Later, in 1892, a railroad opened to Onomichi Station. When automobiles began to spread to households around the 1960s, the region maintained secluded due to its uneven topography.

Today, with the aging of the population, the buildings on this hilly road, which is difficult to climb on foot, are gradually becoming vacant. In addition to the roads, the lack of infrastructure has also made it difficult for the younger generation to take over. However, the view from the building remains spectacular, and the day is filled with nostalgic sights and sounds. 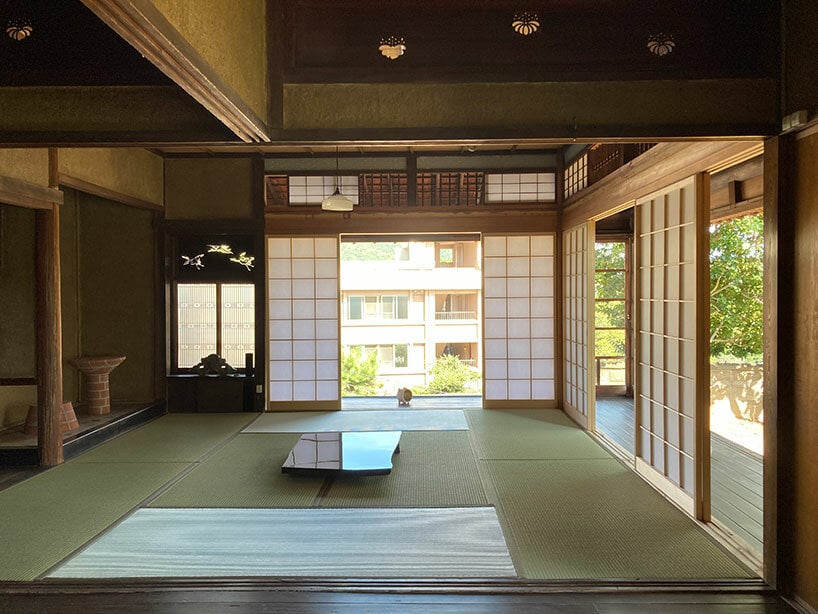 The revival required a series of modifications. More specifically, the floorboards and the ceiling were dismantled, and parts were carefully removed so as to be able to be reused somewhere else. The tilted portion was jacked up and leveled as much as possible, and the corner columns were thickened to reinforce the structure. The finish of the walls was stripped, and the middle skin was returned to its original state. ‘First of all, we carried out repair work so that we leave this historic building for the next generation. In addition, by making the details of this construction open, we hope to be one of the guides for people in similar situations in Onomichi and other areas with similar conditions.’

A big challenge for the team at Schemata Architects was to maintain a low-cost construction. ‘It takes time and effort for amateurs to perform DIY renovations. If the work were undertaken by a construction company, the costs would be significantly increased. Therefore, we decided to separate the construction work into different tasks and thus cut down their expenses. We also sought to reduce costs further by carrying out transportation tasks on our own while getting support from part-time workers and volunteers. Important support was also given by our neighbor HOTEL LOG, which already had full experience in construction,’ shares the team. 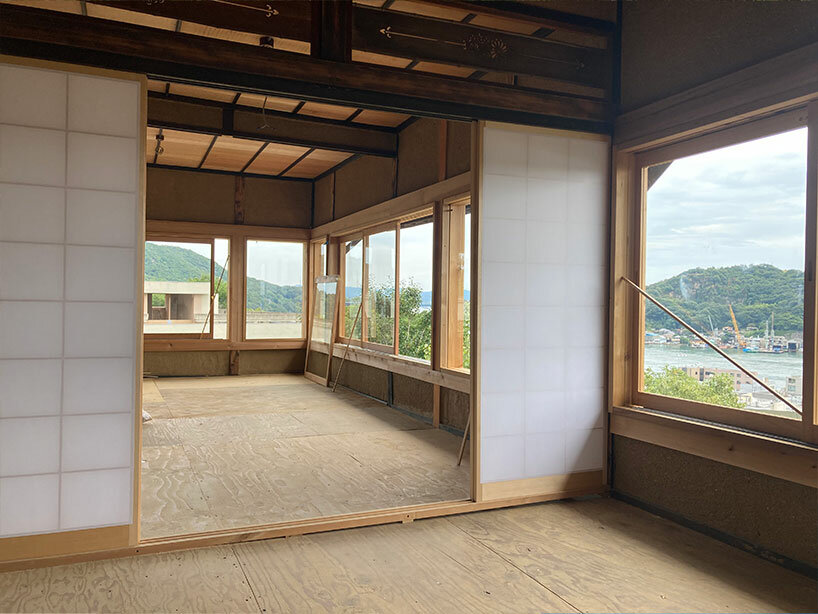 shoji screens have been installed to divide the two rooms subtly 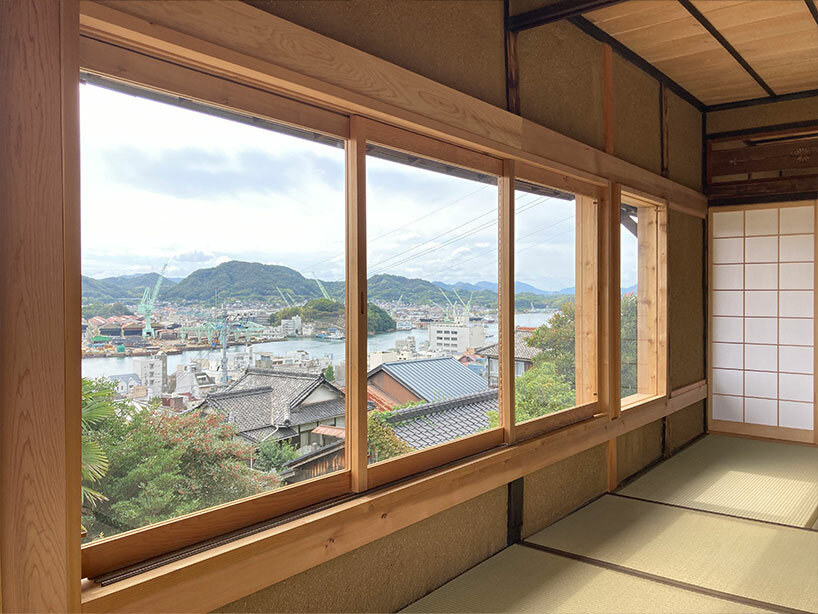 Tatami mats have clad the floor 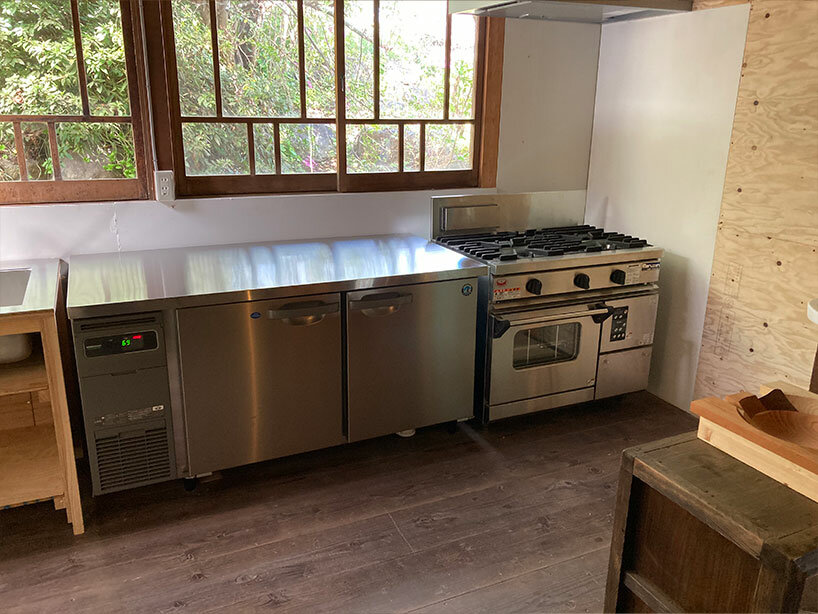 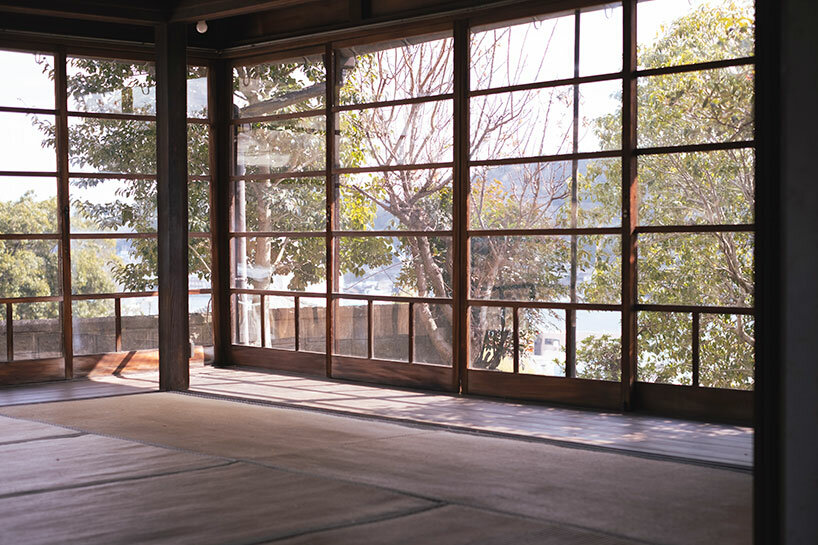 the Japanese-style room before construction 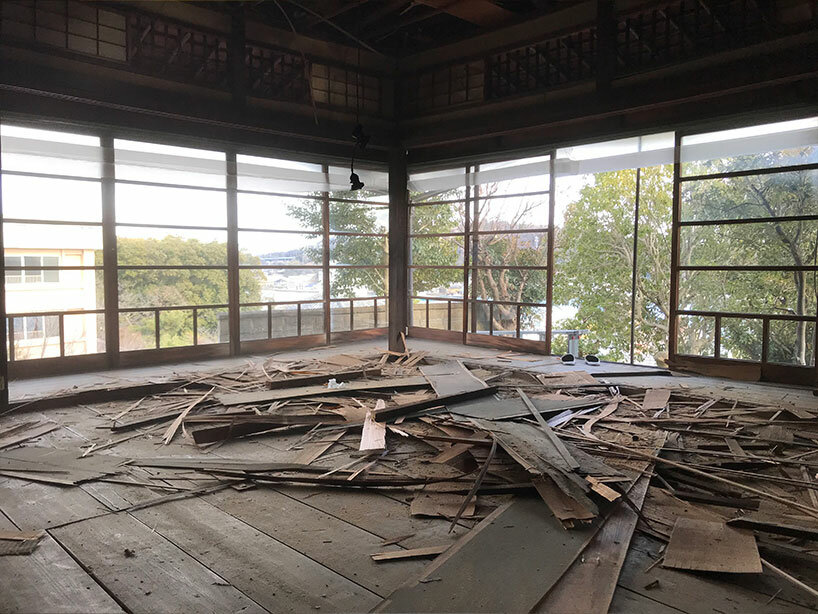 a radical reconstruction to give new life to the interior 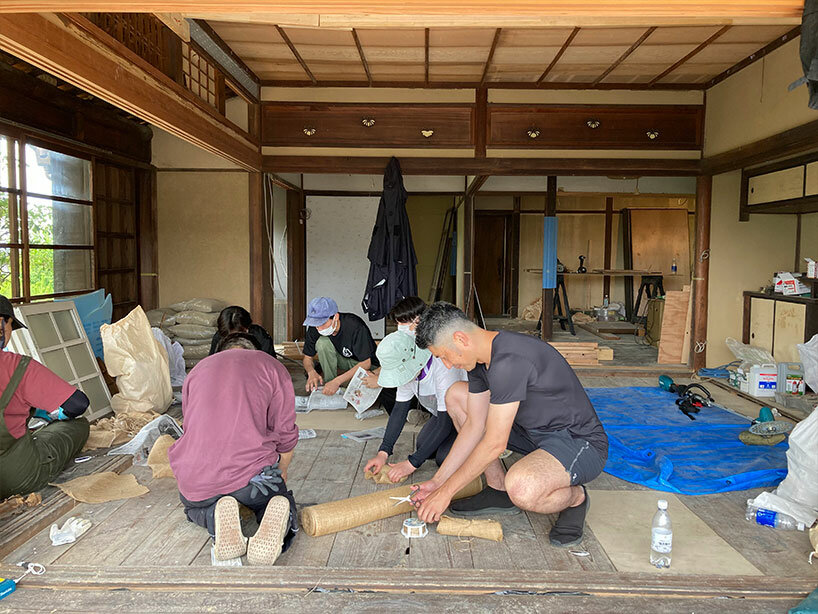 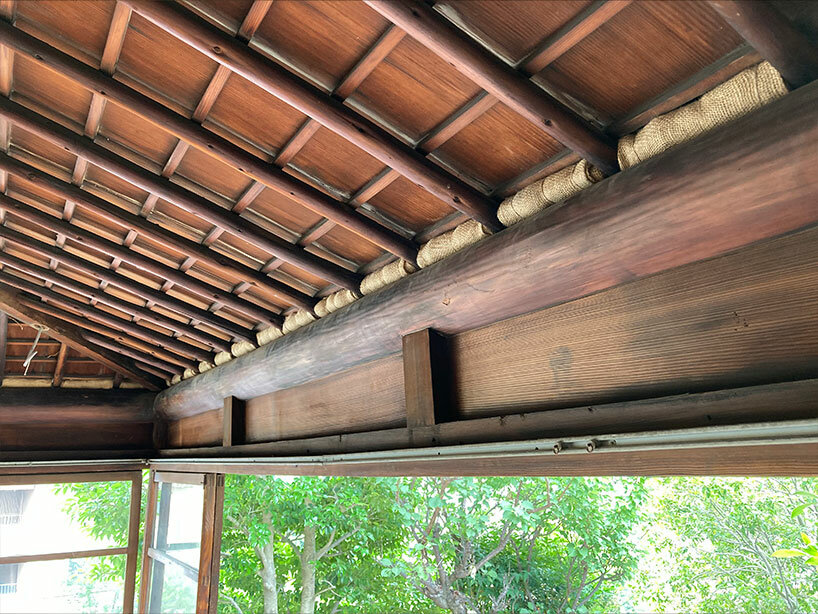 the gap was restored 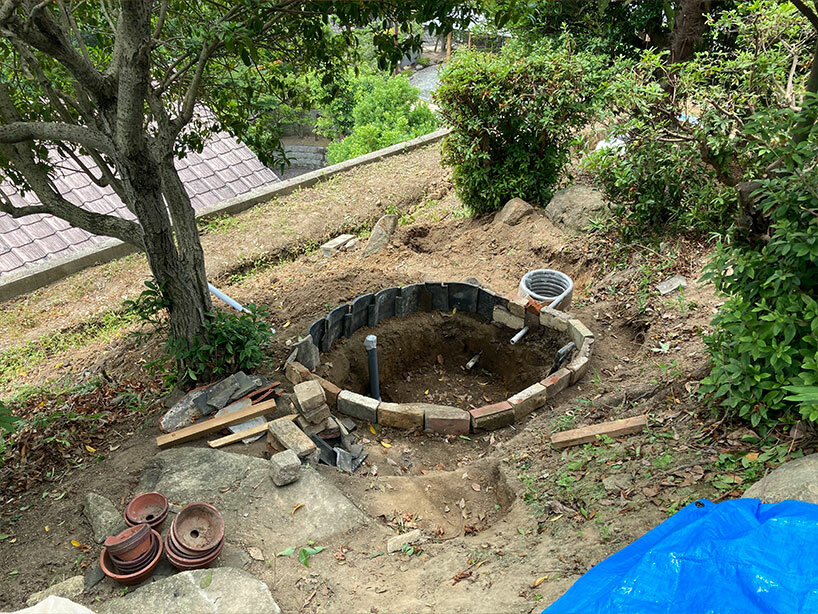 building an open-air bath in a corner of the garden 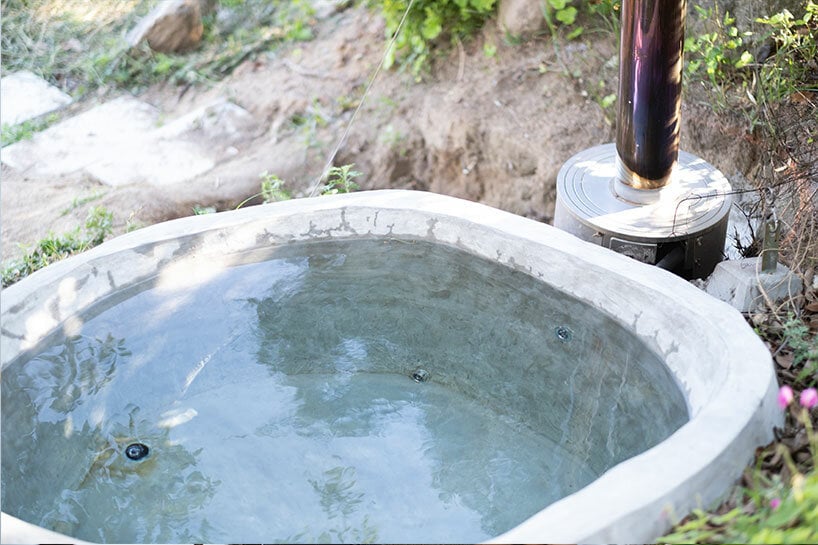 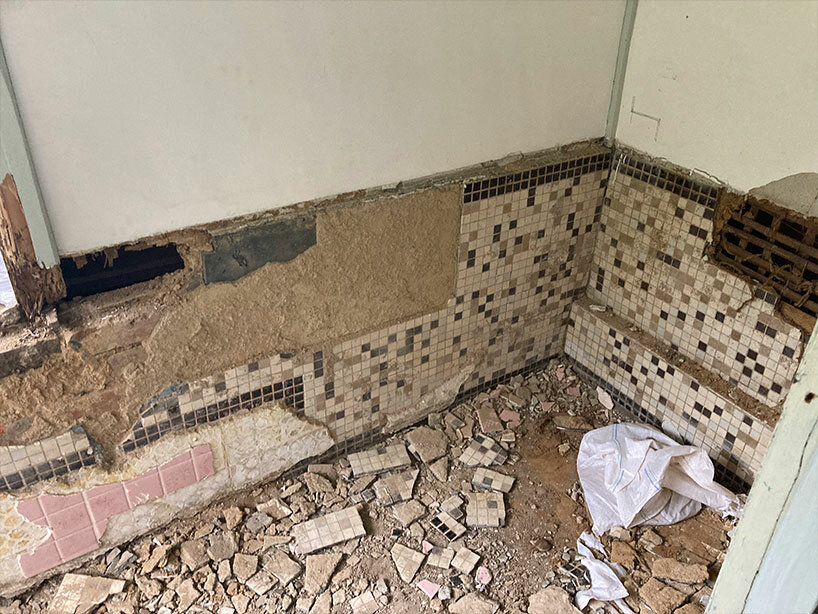 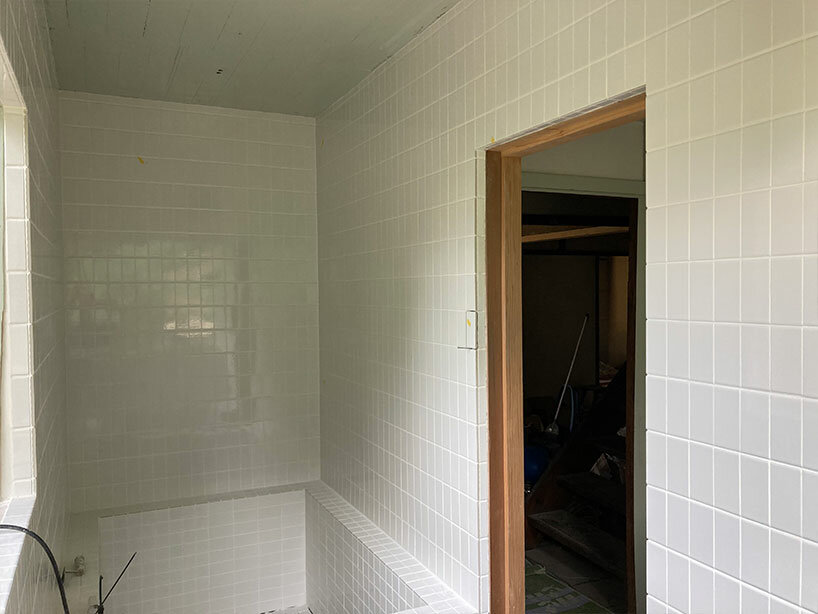 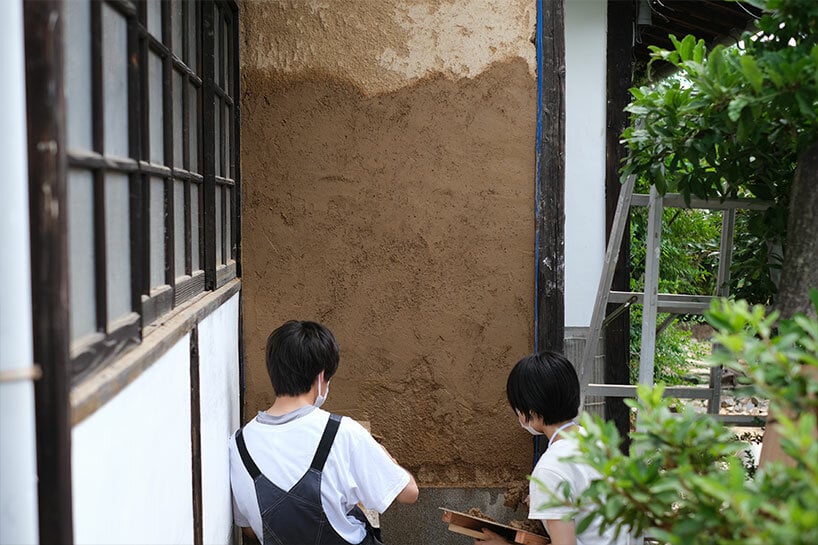 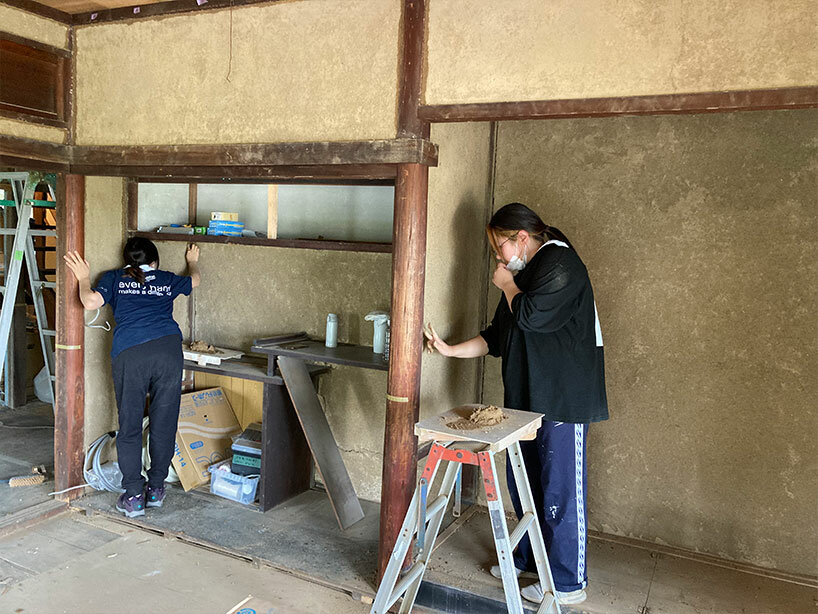 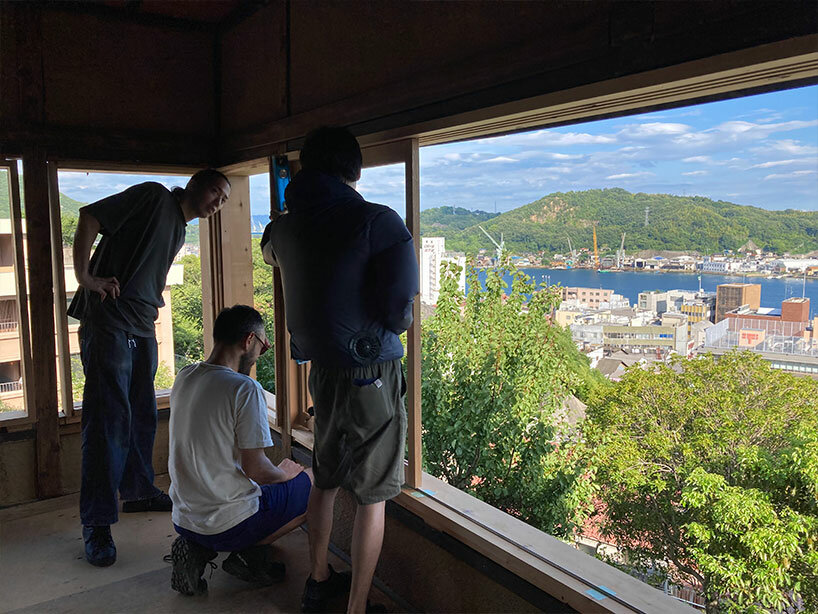 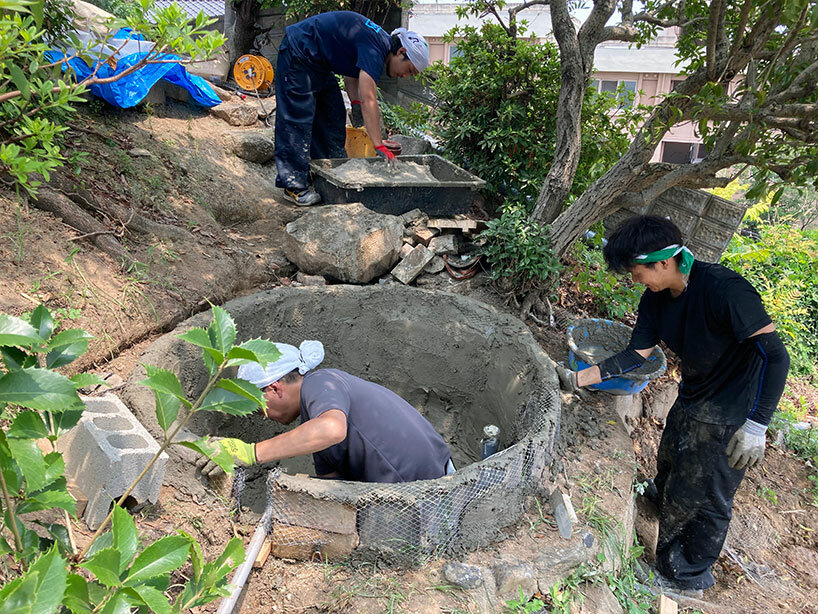 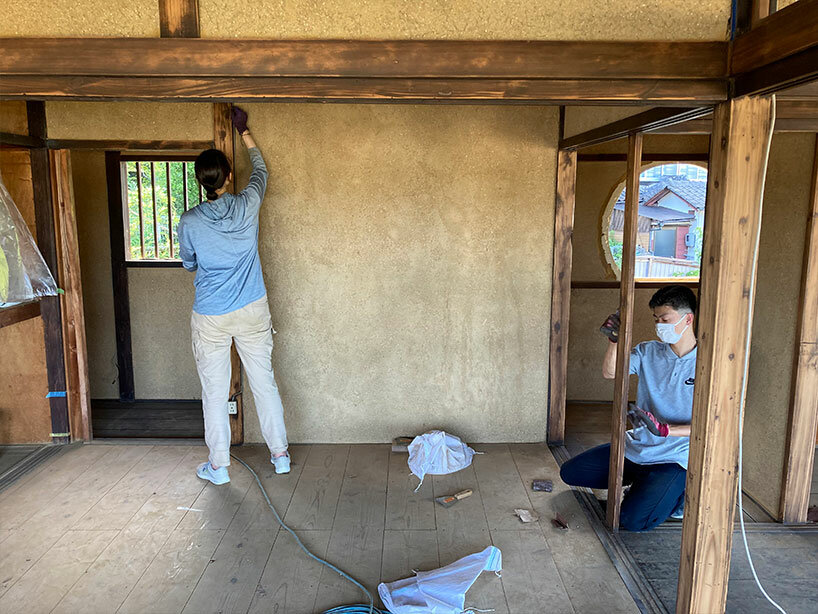 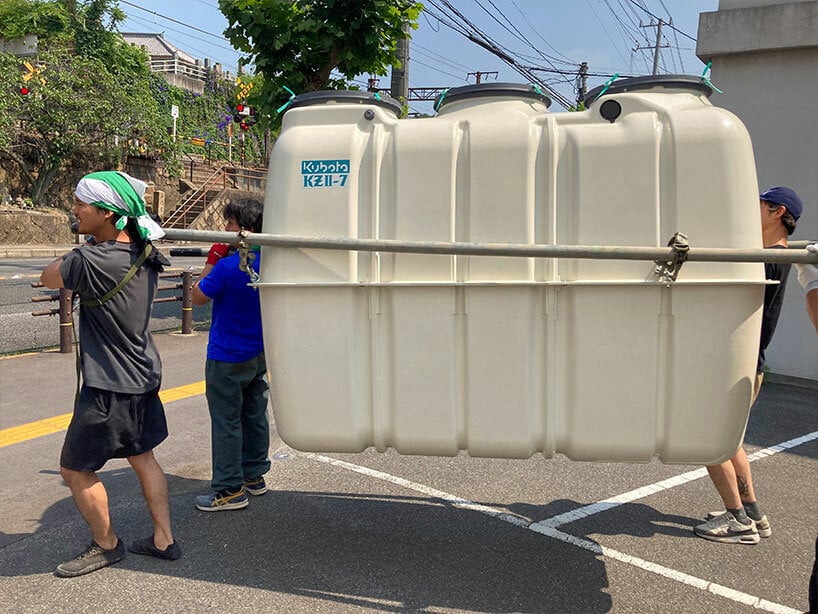 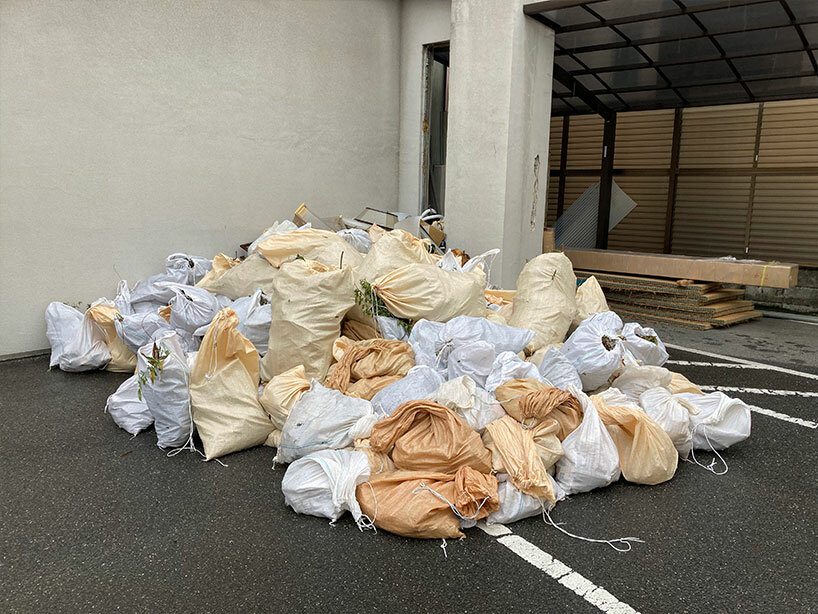 since the site was on a hill, it was difficult to dispose of the garbage, and everyone carried them down. 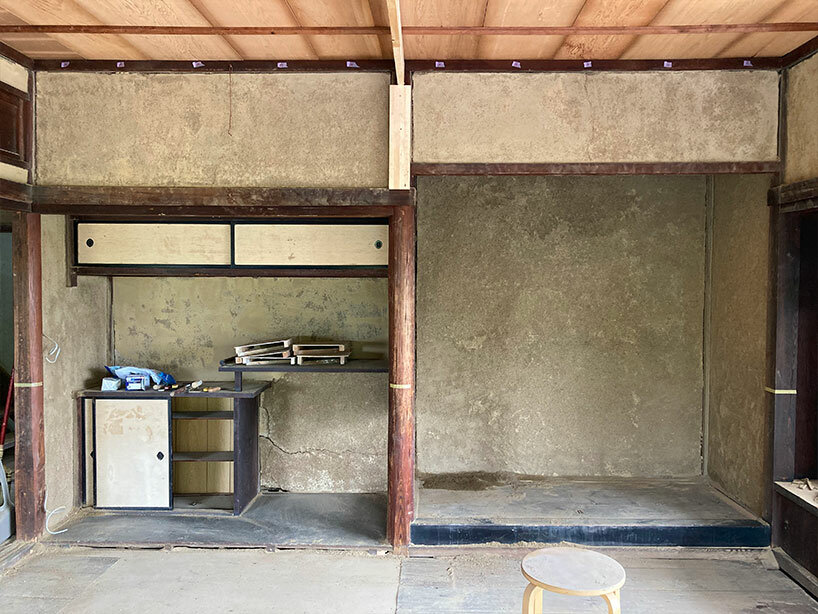 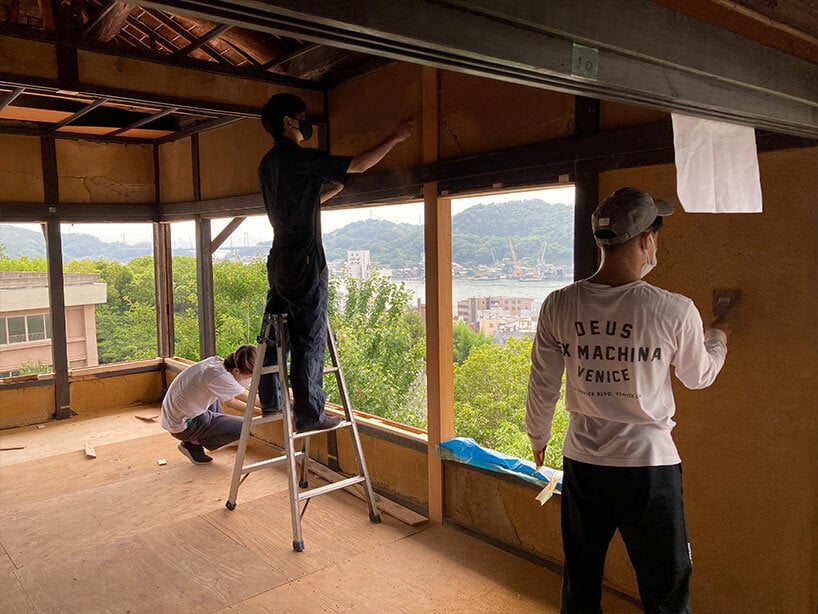 strip off the finish and restore the middle coat 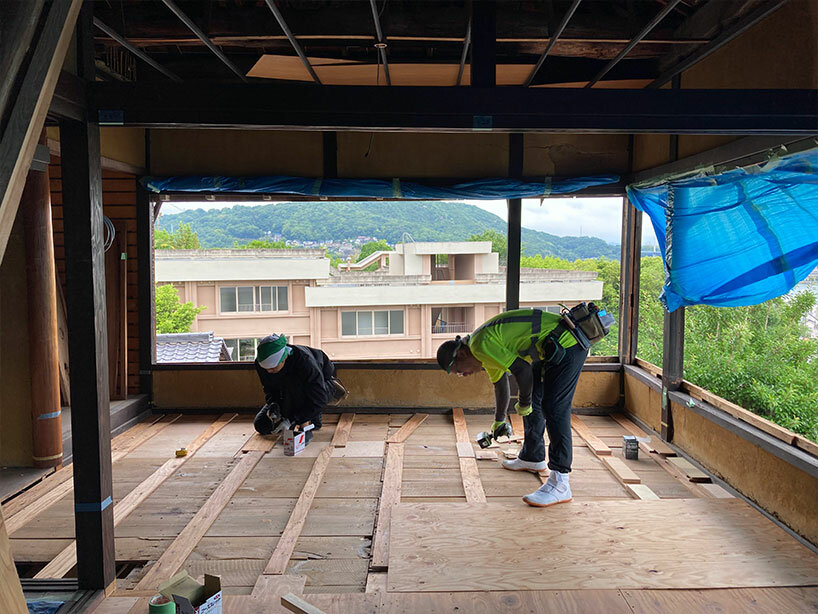 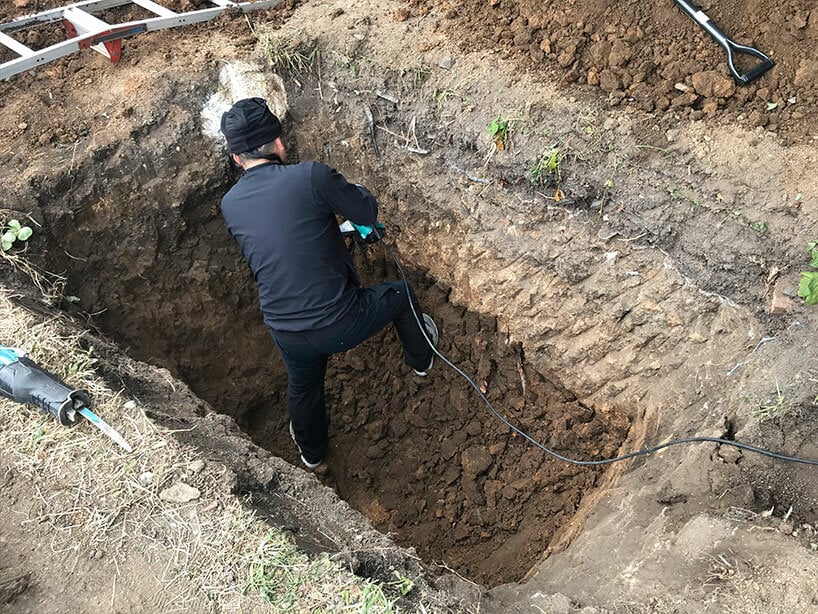 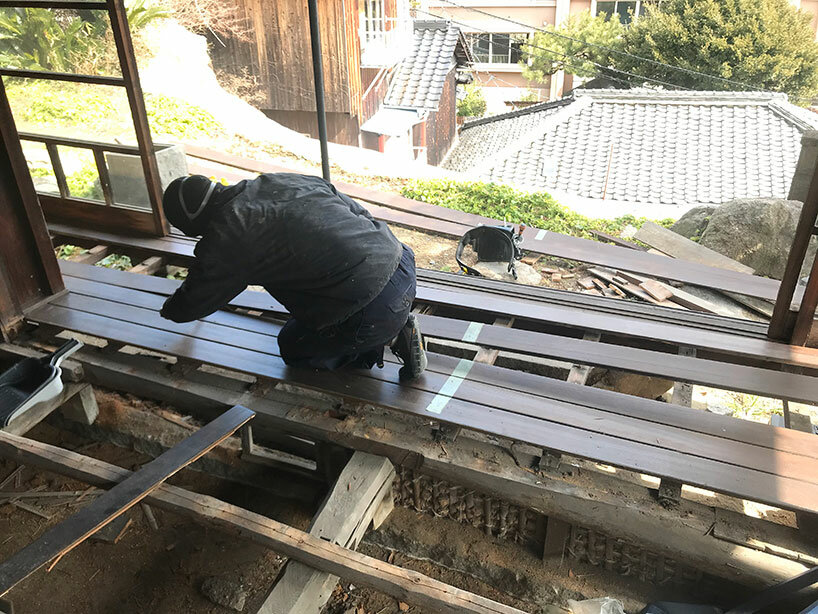