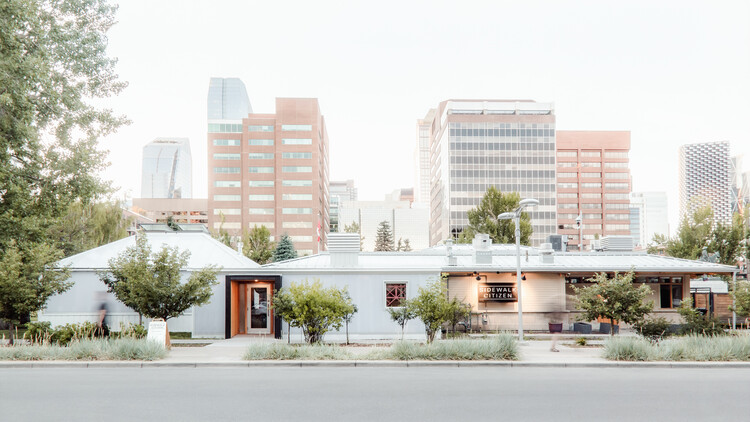 Text description provided by the architects. Calgary’s Central Memorial Park was developed during Calgary’s first major boom at the turn of the 20th century to show the confidence and optimism of a young city, which is a spirit that remains to this day. In the century since its inception, following significant changes to the area, the elaborate gardens and geometric pathways of the formal Victorian gardens have lost their luster. The ambition of the Sidewalk Citizen Solarium is to reinvigorate Central Memorial Park with a year-round dining and event space that connects the park to the city and the city to the park.

The building’s new entry hall serves as a front door and a direct link to the city. As a nod to the character of the park, the entry hall is clad with a variable aperture pattern inspired by façade details on the park’s historic Memorial Park Library. Abundant natural light and controlled climate foster the growth of several species of plants, including a fig tree, a lemon bush, and many other subtropical plants. From the first light in the morning, the translucent cladding floods the space with a soft, diffuse natural light, washing over the restaurant’s patrons and plants throughout the day.

The structure was designed and modeled parametrically in order to ensure a high level of iterability, maintain precise tolerances and accuracy, and seamlessly transition from design to fabrication to onsite assembly. The entire lattice structure required 160 sheets of plywood (or 4,700 square feet of material) milled over 150 CNC hours (see cut sheets above), as well as 450 linear feet of dowel to connect the pieces.

The size constraints of the plywood panels and CNC cutting bed required that the laminated panels be composed of multiple pieces, which are staggered to avoid intersecting seams and structural weak points and then laminated with wood dowels. The wood lattice structure that forms the roof and walls of the solarium is made entirely of 3/4” fir plywood CNC prototyped and milled in-house by Studio North. The plywood components are laminated with wood dowels to form continuous structural members that function as both columns and rafters across the structure.

The rigid frames simply slot together using cross-halved joints which allow for ease of onsite assembly. Over large spans such as the garage door and entryway, exposed laminated veneer lumber supplements the lattice canopy structure. As shadows are cast on the building’s roof, the cathedral-like space is animated by the dappled light, constantly shifting throughout the day. Sitting back and looking up, the sinuous structural lines of the roof and walls invite the eye to wander from one side of the space to the other. At night, light emanates from the wooden lattice structure, illuminating the park around it.